For students of archaeology, ancient history and classical studies at Monash University.

Based on Monash University's Citing and Referencing Guide for Archaeology

Correct citation and referencing can be one of the most time-consuming, but important parts of advanced research in any field. Accurate citation is key to making your arguments effective, and the penalties for plagiarism at any level are serious. As you begin to write an essay in an Archaeology unit, we have prepared this document to help you apply a uniform and consistent citation style.

Research into the ancient world frequently requires drawing on material from multiple ancient cultures, academic disciplines, and formats of publication (books, articles, etc.). Each of these disciplines has evolved their own conventions of referencing over the past century or more. In addition, each scholarly journal or publishing company will often insist on its own particular aspects of style, including citations. For units in the Archaeology major, we have agreed on one uniform style that can be used in all of our units. This guide provides a consistent introduction to the expectations of citation and referencing for those units in the Archaeology major. In short, we use a modified Harvard-style citation system, with in-text citations. It is not possible to foresee all possible examples, and you should contact your tutor if you have any questions or if you are unsure how best to cite something from your research.

The conventions for citing written material from the ancient world differ depending on the language, discipline, and type of document in question. These conventions for the most part fall into three groups:

When citing an ancient text, consider carefully into which category the source falls, and cite appropriately. Depending on your topic, you might reasonably have sources from two or even all three of these categories in an essay.

When citing Greek and Latin literature in text, there are generally 4 components to keep in mind: ancient author, book title, book number, and chapter/section numbers. If you’re citing poetry or inscriptions, you should include line numbers rather than section numbers (as with the Juvenal
citation above). Unless an author only wrote one work, you must include the book title. Do not provide page numbers for Greek and Latin literary sources—they are generally all based on a well established manuscript tradition, and book/chapter/section references provide a universal  reference in a way that page numbers cannot. A few authors (Plato and Aristotle most notably) are referenced differently (using a 16th century numbering scheme). Your tutor can advise on this. In addition, some particularly important Greek or Latin authors will sometimes be abbreviated (Hdt. for Herodotus, Thuc. for Thucydides, for instance). If you are unsure about how to cite a Greek or Latin author, or what an abbreviation stands for, consult your tutor.

Cite in the Bibliography as follows:

Greek and Latin literary sources are listed first, in alphabetical order by ancient author. Note the use of punctuation, and of full stops when initials/words have been abbreviated. If you are working with a translation, you must include the name of the translator.

Citing Egyptian and Near Eastern Literature:

The format for citing Egyptian and Near Eastern written material differs from that used for Greek and Latin literature, and these conventions of discipline and area are important to keep in mind. There is not a universally accepted system of standardized citations for Egyptian or Near
Eastern literature (as there is for Greek and Latin literature) and the convention is instead to cite these texts by the translator or edition. When citing Egyptian or Near Eastern sources in translation, you can in many cases refer to the ancient writer or the name of the text in your sentence, but you must use the modern translator or edition for your in-text reference, as in this example:

“In his funerary stela, the priest Horemkauf refers to care he has taken for the home and bodies of his parents (Lichtheim 1973, 130).”

If you are quoting a source directly, you can also describe it in the sentence, as in this example:

One Assyrian governor wrote home to the king Sargon II explaining his delay in getting back to the capital: “Concerning what the king, my lord, wrote to me: ‘Be at Calah on the 1st of Nisan [March]’—we are clearing the roads, but it is snowing and the snow is filling them up” (Luukko 2012, 190)

Some ancient texts will not be known by a specific name or author. You can include a description of some sort in your essay, and cite them by the modern translator or edition, as in this example:

“Wine from Lower Egypt is listed as one of the offerings in the libation scene on the east wall, southern section of the Colonnade Hall (Epigraphic Survey 1994, 24)

References to Egyptian or Near Eastern sources in translation should be placed with modern sources, by the name of the translator or edition:

When citing from sourcebooks—published collections of translated documents from the ancient world, usually on a particular theme (such as the Persian Empire or the life of Alexander the Great)—you should cite the document similar to the style used for Egyptian and Near Eastern Literature: if possible, refer to the author or name of the text in your sentence, but certainly cite the sourcebook and page for your in-text reference:

“Domitian used the inscriptions on the Altars of the Fire of Nero to criticize his predecessor for neglecting his duties after the fire nearly destroyed the city (Dudley 1967, 20)

As with Egyptian or Near Eastern sources, sourcebooks should be placed with modern sources, alphabetized by the last name of the editor of the sourcebook.

A final note on translations:

Many translations of ancient literature include lengthy introductions and notes. If you are citing that modern scholarship, such as Warner’s introduction to his translation of Thucydides, the work would appear in the Bibliography under Modern Sources with Warner as the author. It is not necessary to reference the particular series (the Loeb Classical Library, e.g.) when citing a modern source.

Citing in the text of the work as follows:

NOTE: There are 3 components: author, date of publication, and page number. Note that there is no ‘p’ or ‘pp’ before page numbers.

Citing an image in the text of the work as follows:

NOTE: Cite what is in the caption for the image. It is generally not necessary to cite the page number as the object has been uniquely identified by the figure or plate number.

Many websites and e-books, especially those formatted for e-readers, may not have page numbers readily available. It is best to find a version that does have page numbers. If this is impossible, you must provide relevant information—for a short source, give approximate location (page 3 of 8) or the paragraph number for a webpage, starting from the top. For a longer source, provide a relevant heading or location (the most recent chapter sub-heading, for instance).

Citing in the Bibliography

Note: in most cases, you will be citing chapters from an edited book, rather than the volume itself.

Chapter from a Book

​Note: The components are author, publication year, title, note that you consulted an e-book, publisher, place of publication, date accessed, and permanent URL. For e-books without page numbers, see above.

Note: Similar layout to a chapter in a book reference, but with information on when and where the conference paper was presented.

Journal article from an Online Database

Note: The components are author, publication year, title of article, title of journal, volume/number/date to identify specific issue, page numbers, and the online database where you viewed the article. For a permanent database (such as JSTOR) you do not need to include the date accessed.

Note: The components are author (if known, but this is not often available for a website), year of publication (if known), title of page, title of website (generally identified from the homepage), organisation responsible if known, and web address. If the page is not dated, you must include the date you accessed the site on.

Note: Exercise caution with theses and dissertations. The author may have subsequently published or revised their research, and these final publications should be consulted if possible. Additionally, standards of oversight or review might vary quite a bit from degree to degree or institution to institution.

Including Images in your Text

It will be useful—even essential in some cases—to include illustrations. These can be plates from books, images from the internet, etc. These should be referred to in the essay as (Figure 1), etc. Images can be inserted either individually on the same pages as the text to which they refer or placed together at the back of the essay (after the bibliography). Be sure that an image from the internet is not plagiarized and that it actually depicts what you’d like it to (photos of archaeological sites, for example, are often labeled incorrectly or, at least, misleadingly). 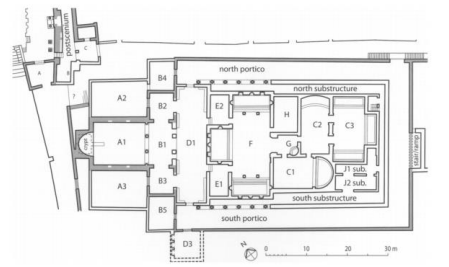 Sample Bibliography Combining All the Examples